Settlers began moving into the area from the early 1840's. In Old English language the name means "fenced village". When the area was first settled in the 1840's one of the earliest settlers was named Harvey and the area was known as Harvey Bay. Wheat and sheep farming industries developed in the area and still provide the main focus today, together with a fast developing tourist trade. In the early years, Tumby Bay was an important grain and loading port servicing the cereal and sheep farming industries. Today it is a service centre for the surrounding farmers and like the rest of the area, a popular destination for holiday makers.

In 1900 when the town was proclaimed it was named "Tumby" but the local residents added the word "Bay" to it. In April 1984, at the recommendation of the Geographical Names Board, the name was officially changed to "Tumby Bay".

The jetty was built in 1874, the second jetty to be built on Eyre Peninsula. Mrs Edwin Harvey performed the opening ceremony by cracking a bottle of champagne over the new structure. The need for the jetty became apparent when ore from the Burrawing Mine was shipped through Tumby. Prior to the jetty, the copper ore and other goods including wheat and wool were loaded into dingies from days or wagons to be transhipped out to larger vessels in deep water. In recent years a new commercial jetty has been built to replace the original jetty dismantled in 1999 due to it being unsafe.

Under our jetty you will find some fascinating residents some quite rare. The underwater terrain naturally divides the structure into 3 sections. The first is a short sandy stretch, mostly fairly shallow, the second is filled with seagrasses and at the end of the jetty - rubble and timber are found scattered on the bottom. Divers look carefully in the sandy section as a lot tend to pass over it. Diverse creatures such as stingrays and seamoths can be found here. Unless you know what you are looking for the strange bony bodied seamoth, which has a turned down snout and is sand coloured, can be very hard to spot . The first one is the hardest to find. As the water deepens the masses of seagrass are quite apparent from the surface as a dark stain. Large schools of Old Wife (Enoplosus armatus) can be seen here, as well as moonlighters (Tilodon sixfasciatum) and various species of gobbleguts, cowfish and puffer. Leather jackets hide in the weed, disappearing the moment you recognise them. Near the end of the jetty where the bottom becomes silty and there are logs and other debris, and the small bottom dwellers have plenty of nooks and crannies to hide in. Here you might find a large octopus or the eggs of the sand octopus waiting to hatch. Even the mantis shrimp normally a crustacean of tropical waters has been sighted here. Divers are still just discovering our hidden wonders. 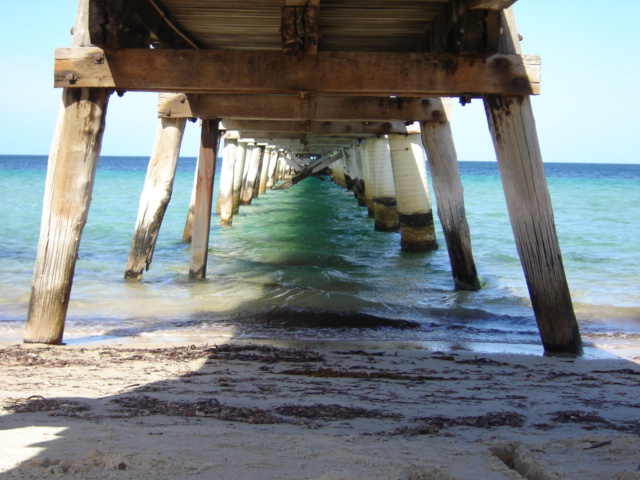 Construction of the jetty was commenced in 1911 and was completed in May 1912, Messrs Lewis and Reid of Semaphore SA were the contractors.The cost of constructing the jetty was approximately 7,000 pounds ($14,000). Other facilities (cargo shed 50 x 30, stacking area, rail tracks, super shed 55 x 30, wheat shed 100 x 50) were proved at an additional cost of approximately 2,200 pounds ($4,400). The jetty was constructed for the shipment of local produce, mainly wheat. As the district developed wool and barley were handled as well. Extensive repairs to the jetty were carried out in 1962 at an approximate cost of 11,500 pounds ($23,000). Further repairs were effected in 1968 at an approximate cost of $2,500. The work was performed by departmental forces, who late in 1969 commenced additional jetty repairs, estimated to cost approximately $9,800. The jetty was cut January 1971 and in May 1976 another $27,000 was spent. formation from The History of Tumby Bay and District, written by Ivy Freeman.

Copies of the book available from the Council Office for $11.